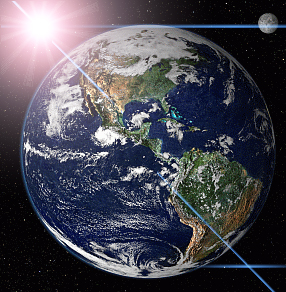 “This Agenda is a plan of action for people, planet and prosperity. It also seeks to strengthen universal peace in larger freedom. We [the UN] recognize that eradicating poverty in all its forms and dimensions, including extreme poverty, is the greatest global challenge and an indispensable requirement for sustainable development.” – UN Document A/RES/70/1

One blogger notes, “Agenda 21 is the global blueprint for changing the way we “live, eat, learn and communicate” because we must “save the earth.” Here everything is heavily controlled by the government: water, electricity and transportation are just some of the areas of concentration that are targeted. So what exactly does Agenda 21 entail? It consists of 115 specific programs designed to facilitate, or to force, the transition to Sustainable Development. The objective, clearly enunciated by the leaders of the Earth Summit, is to bring about a change in the present system of independent nations. Agenda 21 is broken into 8 sections: Agriculture; Biodiversity and Ecosystem Management; Education; Energy and Housing; Population; Public Health; Resources and Recycling; Transportation, Sustainable Economic Development.”

The United Nations Resolution adopted by the General Assembly on September 25/2015 entitled “Transforming Our World: The 2030 Agenda for Sustainable Development” (A/RES/70/1) includes 17 ‘goals’ and 169 ‘targets’ to foster and promote sustainable development.

These goals are as outlined in Agenda 2030:

These new goals and targets of Agenda 2030 aim to build upon the “Millennium Development Goals” and to complete what they did not achieve. These eight Millennium goals are largely based on the original eight sections of Agenda 21.

The eight Millennium Development Goals are:

MDG #3 and the Agenda’s #5 are virtually identical concepts. MDG #2 and the Agenda’s #4 are likewise similar. As the Agenda is a continuation of the original goals outlined in Agenda 21 and MDG, there are many similarities between each of the goals.

But there is a consistent trend; whether the outline is categorized as MDG, Agenda 21 or Agenda 2030. Eradicate poverty & hunger, provide education, healthcare, et all are all trends of the same theme. And this theme can be summed up in two words — Government Control.

All of these goals are an admirable, ambitious plan for the future of Humanity and the planet. However, a key element becomes lost in the implementation of those goals. The rights of the individual are trumped by a state attempting to pursue a cause for the greater good.

An unelected, unaccountable group of elites called the United Nations believes in some obscure God-given right to dictate how Humans, as a species, will lead lives in conjunction with the planet and its environment. Self-determination and personal responsibility become concepts alien to the successful continuance of our species — or so their manifesto would have one believe.

The UN Agenda basically implies that any problem of nature can be solved by removing the Human element from the equation.

As noted by Arthur Smitherman, “Liberal Fascism and Nazism are very closely aligned, the big difference being that the liberal fascists practice the use of the SS which stands for “subtle and systemic”. And that is what agenda 2030 is, the “subtle and systemic” is the use of soft subjugation techniques to control the populace and eventually depopulate the world.”

Smitherman goes on to note, “Agenda 2030 is advancing rapidly. It is heartwarming to see so many people waking up. But the UN has sold Agenda 2030 to all major parties and Municipal Governments, they are all complicit in the traitorous and seditious plans to undermine our Rights and Freedoms, and restrict our food supply. In the rural areas farmers and rural people are under attack. Our Government is at War with us, and intended to start a depopulation program in 2030. Everyone into the cattle cars! We are going to the gas chambers!”

Under the Agenda, property rights become a thing of the past. If and when full implementation of this Agenda becomes prevalent, the net result is a state controlling who lives where.

The United Nations believes it has a mandate to govern the world. Compliance of the populace is necessary to broker these ambitions fostered by the “elites” including, but not limited to, George Soros and Maurice Strong.

Maurice Strong is arguably the father of this Agenda. In 1971, Strong commissioned a report on the state of the planet, “Only One Earth: The Care and Maintenance of a Small Planet” and co-authored by Barbara Ward and Rene Dubos. The report summarized the findings of 152 leading experts from 58 countries in preparation for the first UN meeting on the environment, held in Stockholm in 1972. This was the world’s first “state of the environment” report.

One of the single biggest targets of “Sustainable Development” is squarely focused on climate change and the belief that it is Humanity causing our planet to warm, sea-levels to rise, death of polar bears and melting of glaciers.

As demonstrated by Dr. Ileana Johnson Paugh in her best-selling book, “U.N Agenda 21: Environmental Piracy”, the globalist governance uses “Agenda 21” to control every facet of our lives: global land use, education, population control, health care, reduction of economic activity, and population reduction to a “manageable size” determined by the global elites who drive U.N.‘s “Agenda 21.”

Dr. Paugh notes, “U.N. Agenda 21 has been in the works for decades, spearheaded by environmentalists, foreign individuals, third world countries, and non-profit organizations around the world. In the name of protecting the environment, socialist global governance has been quietly implemented at all levels of government via government grants, public-private partnerships, and EPA regulations involving use of land and water, affecting every facet of our lives.
Mandating population re-distribution in the name of biodiversity, re-educating our youth into sustainable everything, green jobs, green buildings, green cars, green energy, urban sprawl control, government bureaucrats from the United Nations and our own elected representatives are going to rezone us, resettle us, reduce our numbers, and tax us into the sustainable community described in the Wildlands Project Map.
Forcing us out of cars, into bike paths, light rail, walkways, greenbelts, ever more conservation areas forbidden to humans, urban boundary zones, and high-density areas, U.N. Agenda 21s 40 chapters will limit the behavior of individuals, organizations, and companies, covering everything we do in life. U.N. Agenda 21 and has been implemented administratively with help from ICLEI and little Congressional debate or involvement. Some of the provisions of U.N. Agenda 21 have been included in other laws passed. Presidential executive orders are forcing its implementation at the national level.
Our sovereignty is at stake. We must stop U.N. Agenda 21 before it is too late. Every chapter of it violates our Constitution.”

On implementation of this doctrine, the UN is insidious — special interest groups, the UN General Assembly and groups of “useful idiots” (politicians & public figures) are keen to realize the Agenda on a global, national and local level.  One such group, headed by George Soros called “Open Society Foundation“, spearheads many local “grassroots” initiatives promoting the Agenda.  The Open Society has donated millions of dollars to the International Council of Local Environmental Initiatives (ICLEI, a UN branch); over $2 Million in 1997 alone.

To say nothing of the millions of dollars raked in by Al Gore spouting IPCC (Intergovernmental Panel on Climate Change) false science.  Dr. Paugh notes, “It is sad to reflect that government policies and scientists around the earth rely on these tampered data to fight phantom global warming, giving rise to a huge climate change industry that does nothing but redistribute wealth and fleece the population.”

Former Canadian Prime Minister Stephen Harper was one such individual who rejected arbitrary UN dogma and to that end helped Canada avoid many potential UN incursions into our social policies.  Canada’s current Prime Minister Justin Trudeau is only too happy to go along side with the United Nations — but that comes as no surprise when one considers the history between the Liberal Party and Power Corp. aka, Maurice Strong; but that’s another chapter for another day.

Working toward a common theme of world peace and an end to poverty is an admirable notion but some say the cost is too high; it sacrifices individual freedoms and liberties but does so in such an insidious way — most people just won’t notice. While ‘Sustainable Development’ may sound nice, when one looks into how the implementation process is occurring, it becomes a reason that should give one pause; the Agenda and Sustainable Development are really cloaked plans to impose the tenets of Social Justice or Socialism on the world.

Kelly O’Connell (author and attorney) notes, “Socialism is defined as a centrally planned economy in which the government controls all means of production, according to the Library of Economics and Liberty. The whiff of socialism is strong in Agenda 21. First is the doctrinaire, self-righteous tone of the elites scorning the ignorant capitalists who destroy the earth and the poor. Second is the staggering ignorance which claims global lands would be better organized by bureaucrats. Third, the claim that the rich owe the poor their wealth—which is the central idea of Marxism. And fourth, that the earth is unstable because of capitalism and progressives must battle to save our planet or we are all doomed. Because of the failed nature of socialism and Marxism in history, Agenda 21 will be as successful as the passenger pigeon in advancing “sustainable growth.””

Simply stated, the Agenda is a means to increase government control by increasing citizenry dependence upon the state. This Agenda is otherwise known as “The New World Order”.

The Agenda has been implemented, arguably since 1972.  This insidious movement has castrated political movements, public perception and public figures — over decades.  This shift toward a UN sponsored totalitarian state is alive and well.

One cannot solve all that ails the world in one fell swoop unless one is willing to embrace the loss of individual freedoms and liberties.

Cassandra Bennett points out with certain validity that, “[…] and say there’s really nothing to be concerned about. Agenda 21 exists, but it’s an entirely voluntary measure. The United Nations does not have control over sovereign nations and therefore cannot dictate legislation to them. It has tried, and it has failed.
As far as intergovernmental bodies go, the EU is the dangerous one. The UN would collapse in on itself if the U.S. withdrew financial and political support, and Americans value their freedom too much to ever allow themselves to be taken over by UN bureaucrats. They’ve already flipped them the bird in the past.”

And perhaps Bennett is correct.  Although it may be tough to believe as social engineering towards an apparent, so-called, “Utopian society” has manifested itself into mainstream ideology.

The United Nations’ Agenda 2030 has been in the process of implementation since 1972 and is showing no signs of slowing down.

Reject the Agenda.  Fight it.  You have a choice; either become complicit in the naïve belief that government and the elites know best how to take care of you while simultaneously surrendering what freedoms and liberties you currently enjoy or stand up against this Orwellian theme of “one world government”.

The choice is yours.

And that is Canadian Common Sense.

9 Responses to Agenda 2030: The Monumental Surrender